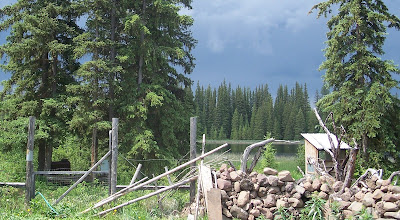 We can see and hear them coming. This one is a storm to the northwest. We've experienced many terrific lightning and thunder, wind and rain storms. This was a new and ominous sound to us. Threshing, mashing sounds of a huge wind. Aki was at the coop preparing a space and run for the new hen and chicks. "What is that", I said in part incredulously because of the unfamiliarity of this steadily approaching sonorous sound. I headed down toward the lake where the sky opens up for a better look. A storm of solid dark grey blanketing the northwest sky moved swiftly, loud, swiftly and louder. I stood in this wide sky space in wonder, taken by the power of it. It wasn't coming head on. The path of the storm was just north of us and the sound was becoming very loud. Instinct kicked in, adrenalin shot into my system. I was awake. 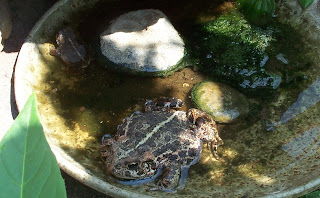 It was across the lake, in the middle, then a loud "tat" on the metal roofing of the outhouse just behind me. For that split second I pondered and could not really believe how dense I was. "Hail!" . We raced for the gardens grabbed all the tarps still, luckily, in their positions ready for the next frost. Working quickly as the hail moved across the lake with deafening sound Aki and I just had the vulnerable plants in the garden covered when the hail hit full force. We stood over the last half dozen broccoli plants, straddled over the bed holding a piece of plywood to shield them. We stood and waited out the storm, pelted by hail stones .

This kind of storm happened 6 years ago while we were away. We get hail all the time but this hail is big, solid and comes down thick. 6 years ago it pummelled the garden leaving every plant in shreds. It shreds the leaves on the trees, puts dents in our truck hood. 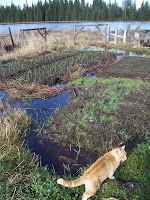 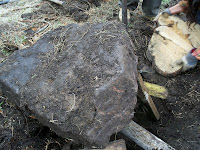 We are always in awe of the power of the elements, as we mattock sod, coax boulders out of clay, turn hard-packed soil and carefully build garden plots. Every year it is different with different challenges. This year we watched as tadpoles congregated between the onion and zucchini plots, and we still have to roll up our pant legs in order to weed the garlic. Dikes, we concluded, would have been the solution. Perhaps next year, unless the lake drops again.


When we moved up here we found a mound of rocks just down the hill from the cabin and some 200 ft up from the lake waterline. The discovery of an old fish hook led to speculation that it was the remains of a dock, and that the lake had once been much higher. Around the lake's shallow shoreline the reeds are tall and the grass grows lush for 100 to 500 feet up to the forest line. 20 foot tall skeletal remains of spruce trees rise out of the grass referring to a different time, a higher water level that drowned them and a stretch of time when they grew.
An old timer told of us of a time in the 30's when our lake was a meadow that, as a boy, he used to help hay.
This year the lake has taken most of our lakeside garden. Over the last 2 years the lake has risen 3 feet. 6 years ago we had a 100 ft pallet walkway built over the soft mud to the receding water line. At least 7 feet lower than it is now. 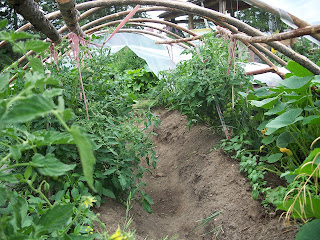 The gardens on higher ground are looking green and lush now, and as we feast on chard and spinach and basil and watch the tomatoes ripen and the cucumbers and apples form, it is often with amazement.


They call this the simple life.
http://www.caribooblades.com/
Posted by Scott.and.Aki at 8:17 AM