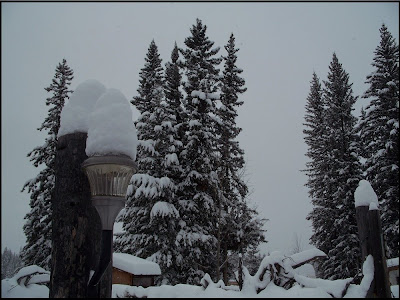 The sun is getting higher in the sky. A new season is coming. Looking forward to it for sure.

Aki and I have run our shop and cabin on solar power since 1998.


We are 100% solar powered from March until the middle of October. We work full time making knives and large timber tools.

We designed and installed our system
starting with 4 x 6 volt golf cart batteries, 2 x 85 watt panels and a 1200 watt inverter. The batteries are tough, inexpensive and easy to replace. Twice a year I'll clean them with baking soda and water then top off each cell with distilled water.
I've seen people spend lots of money on batteries. Tough golf cart batteries are the way to go for our shop and lifestyle.

Today we have 422 watts of panel. Four panels, a 40 amp regulator and we have a 1,750 watt inverter and built a 200 watt portable unit as well with 2 golf cart batteries for working around the place.

We built a manual tracker. 4 panels are mounted on top of a 20 foot pole set 2 feet into the ground in a cement housing. As we work we turn the panels to face the sun. Turn and tilt.
This has increased our power by 45%. The manual tracker we designed.The tracker put us at the level of power we are satisfied with and grounded the system well.

An excellent ground is really important. Ground your inverter, batteries and panels.

Trick is to work with the sun.  Use power a lot when it is there in the sky.
At night we use stored power for light, music and small amp tools.


If you have a steady wind a wind generator is the way to go.
It's quite amazing once you begin... Turning on your tools being powered by the sun.

Back up power has always been a concern here this time of year.

Late fall and winter. By the beginning of March we are free again to use as much as we want from the 4.5 billion year-old nuclear power plant in the sky. Although we've come to a spot in our time where we don't need a lot, we do want some. 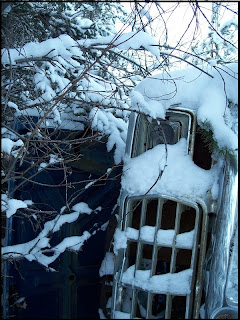 Besides solar in the winter the first power generation we produced 19 years ago was from a 35 amp 12v alternator I parted from an old wreck left on the land here. Rigged it up to an old 3 1/2 horse lawn mower. Did the job for a while. It was handy to have had it on wheels, kept the throttle on the handle bar but the old motor was pushed down with those 4 dead energy-sucking deep cycle batteries. The small 3 1/2 hp engine drank a surprising amount of gas, began to burn oil then died after a couple of seasons.

We traded for a second hand 10hp honda motor. It was nice. Ran well and was not loud.

Built a frame everything could sit on securely. Rigged a 50 amp alternator up to it from another wreck on our land. It ran well until... we needed more power.

of $400 a month for the next few years. We ate a lot of hares, dandelions, mushrooms and wild onions. It was a little rough but when we look back we realize that starting from there was great. Determined we were and still are.

...We needed more power. We needed the late fall and winter to be power-ready to be able to " exploit" Christmas selling knives and art and cover the spring when we needed time to plant our gardens.

We bought a 150 amp alternator from a trucking outfit and used parts and wiring from the from the
wrecks. 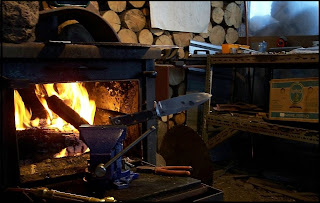 Machined a pulley, adapted the larger alternator to the engine. Started it up. The unit was giving the four 6v deep cycle batteries what they wanted but the 10hp engine was working hard. Wasn't ideal - again it wasn't great on fuel because it was working hard but was better. Bought a small sanding machine a second and slightly larger grinder and a small band saw.

Could not believe we had lived without the new shop machines. More power fell into our lives like a new pair of socks.

We were travelling around the province with handmade knives and edge tools participating and selling at 6 Christmas shows, 2 spring shows and 5 su 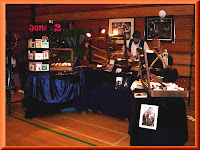 mmer and fall shows. Fairs, art and craft and knife shows. We even did a couple of trade shows. The best was the Sto'lo nations Pow Wow in Chilliwack B.C..

Not a second to spare for 6 years.We needed more
power....

Aki and I started to build a reputation for our art,tools and knives. Over half of our sales were repeat customers by 2004.

Crazy thing was that we did not have any time or money. We kept up our garden but that was absolutely the only time we had. All the money we made was for fuel to travel, motels, food, show fees, insurance...

The piston rod broke. The engine was worn out. It was September. Orders had to go out. The Christmas stock had to be started.

We had a '84 Safari van. 4L engine, propane. The rear end was shot from heavy loads, lots of travelling and no maintenance.

Looked at the engine. The air conditioning had been dismantled. With some small adjustments and fudsing with belt size the 150 amp alternator would fit right into the spot the compressor was in.

More power, burned less fuel, burned cleaner and it was quiet. I thought small engines would be more fuel efficient, less impact. The thing was they were working hard. Like when the car companies first put six cylinders in full size pick-ups. They didn't burn less gas and they wore out faster and when the going got tough they have a hard time performing the tasks.

In idle position the alternator still put a demand on the engine but wasn't threatening its life. We had added another solar panel. Our power needs had been met. So what did we do... bought a bigger bandsaw and added a couple more batteries.


When the van was on in the winter we`d pump water, vacuum, charge batteries and the computer and grind steel.

The van lasted 5 winters. It started making sounds, worn sounds. The crank shaft pulley`s centre had shattered and 2 mounting bolts were sheared off. The drive pulley was being ripped off the engine. Holy torque.

In comes our old S-10, 2.8L. The great aspect to this plant was that the crank shaft pulley was a double belt to the alternator. A double pulley. Easy fit. Welded up an adjustment arm to accommodate the size. A couple of attempts at sizing the 2 belts which were different lengths.

It should run for awhile. We shut down our shop for December and January now. By adding one more panel we have the power we need.

Unrealistic some say, every person has their price some say. We don't believe that. Some can't be bought.

How much do we need to get started?